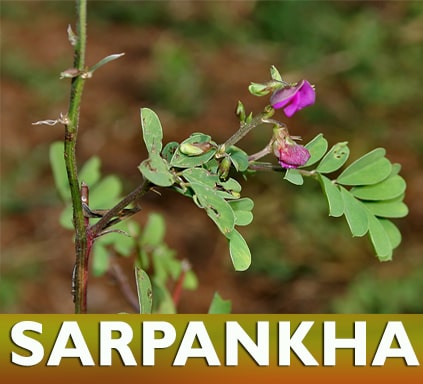 It is widespread all over the tropics. It naturally grows in grassy fields, waste places and thickets, on ridges, and along roadsides, in Java.

T. purpureais native to tropical Asia, and is found from India and Sri Lanka to southern China, and through South-East Asia to tropical Australia and the Polynesian Islands. It is now naturalized and cultivated pantropically

In Hawaii, it grows near the seashore. It grows from sea level to an altitude of 400 m though it can be found at up to 1300 m altitudes. It prefers dry, gravelly or rocky and sandy soils, but in Madras (India) it grows well on loamy soil.

It contains Flavones, Flavanones and Prenylated flavonoids, Chalcones and Rotenoids

The hydro-alcoholic extract of aerial parts of T. purpurea possess hepatoprotective activity against arsenic-induced hepatotoxicity which causes acute hepatic injury and hepatocellular necrosis, thereby causing leakage of the cellular enzyme. The ethyl acetate fraction of ethanolic extract of T. purpurea was investigated for its hepatoprotective activity against carbon tetrachloride-induced hepatocellular injury. It was observed that the extracts significantly reduced the Serum Alanine Aminotransferase, Aspartate Aminotransferase, Alkaline Phosphatase, Total Bilirubin and also reduced necrosis & inflammation when compared with the toxic group. The Methanolic extract of also possesses Hepatoprotective activity due to the presence of flavonoids.

The extract of Tephrosia purpurea is effective in reducing the serum concentrations of Serum Glutamic Oxaloacetic Transaminase, Triglycerides (TG), Total Cholesterol (TC) and Urea, and increased Insulin level. The flavonoid rich fraction of the ethanolic extract of T. purpurea was used to evaluate the anti-diabetic activity, the extract was well effective in providing the beneficiary effects on diabetes-induced cardiovascular complications as well as in the treatment of cataracts and these activities may be attributed due to the presence of Flavonoid, Quercetin, and Rutin. The anti-diabetic activity of the silver nanoparticles using aqueous extract showed significant free radical scavenging ability, inhibition of carbohydrate digestive enzymes (α-Glucosidase and α-amylase), and enhancement of glucose uptake rate.

The anti-inflammatory activity of Ethanolic extract of the T. purpurea root was found that the inflammation was significantly reduced in the extract treated when compared with the inflamed group. The anti-inflammatory activity was proven by inhibiting the total leukocytes and neutrophils, induced by a variety of inflammatory stimulus, attributed due to the presence of flavonoid and phenolic components present in the extract .

Ethyl acetate extract of possessed antinociceptive effect when tested against Acetic Acid, Phenyl-pbenzoquinone, Formalin, and complete freund’s adjuvant-induced writhing response by causing mast cell activation leading to the release of inflammatory cytokines (TNF-α, IL-1β, and eicosanoids) resulted in inhibition of inflammatory overt pain-like behavior. The analgesic property was due to the presence of phenolic compound, thus proving promising anti-nociceptive activity.

Chloroform and Methanolic extract possess antioxidant activity. Flavonoid present in the extracts was responsible for its anti-oxidant mechanism. The Ethanolic extract of T. purpurea possessed anti-oxidant activity in an in-vitro study where it exhibited free radical scavenging in 1,1-diphenyl-2- picrylhydrazyl (DPPH) assay and anti-lipid peroxidation properties in carbon-tetrachloride-induced LPO assay. Macrophages have been involved in the inflammation process and during the inflammation, there is an increased production of superoxide ions. The inhibition of superoxide generation is related to anti-inflammatory activity.

Tephrosia purpurea exhibited better anti-cancer activity when tested using human MCF 7 cell lines (estrogen receptor-dependent and carries the tumor suppressor p53 gene), an in-vitro method. Mainly due to the presence of flavonoids, this genus exhibits the chemo preventive role which affects proliferation and angiogenesis. It is evident that plants are a good source of anti-cancer agents. The three human cancer cell lines, namely, Prostate (PC3), Pancreatic (PANC-1), Colon (HCT116), and one normal cell line (human fibroblast) were used for the study. It was observed that the Isoglabratephrin displayed inhibitory activity against proliferation of PC3 and PANC-1 by inducing chromatin dissolution, nuclear condensation, and fragmentation, thus providing evidence to treat human prostate and pancreatic malignancies.