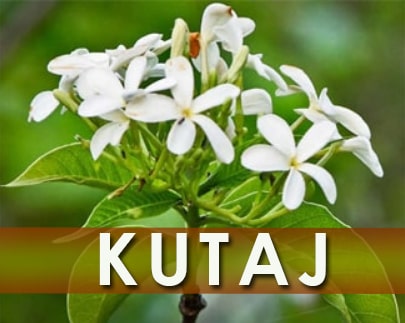 The plant is distributed throughout the tropical and subtropical regions of the world and in India, it is distributed over altitudes of up to 4000 ft and is also found in the dry forest

It is a prominent antimicrobial agent hence used in Diarrhoea & dysentery.  Kutaj helps to control diarrhea by improving the digestive fire. It also makes the stool thick and controls water loss due to its absorbent and astringent properties.  In severe dysentery, inflammation of the intestine causes the appearance of mucus and blood in the stool. Consuming Kutaj helps to control mucus by improving the digestive fire. This is because of its appetizing and digestive properties. It also controls blood by reducing the inflammation of the intestine due to its cold and astringent properties

The hypoglycemic property of Kutaja plays a significant role in alleviating the blood sugar levels of the body. The production of Insulin from the pancreatic beta cells becomes active on consumption of kutaja. It helps to reduce the breakdown of starch into glucose which in turn leads to low blood glucose levels.

Being a potent digestive, it stimulates the secretion of digestive juices thereby increasing the absorption of essential nutrients and enhancing digestion. It possess anti-bacterial & anti-helminthic properties which are highly beneficial for treating & excavating intestinal worms