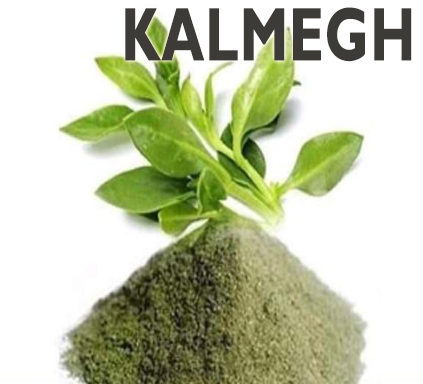 Kalmegh is a native of tropical South-East Asia and occurs throughout hotter parts of India.

It is widely distributed throughout plains of India from Uttar Pradesh to Assam, Madhya Pradesh, Tamil Nadu and Kerala

Other categories of compounds that have also been isolated include Flavonoids (flavones), Noriridoides, Xanthones, Polyphenols and Trace elements (Cr, Mn, Co, Ni, Zn, Cu, Se, Rb, Sr, and Pb) and Macro-element (Potassium and Calcium) were identified and quantified in the roots.

Aqueous extract, Andrographolides and Arabinogalactan proteins isolated from the dried herb were screened for anti-microbial activity. The result showed that the aqueous extract and Arabinogalactan proteins have antibacterial activity against Bacillus subtilis (B. subtilis), Escherichia coli (E. coli), Pseudomonas aeruginosa while Andrographolide was only active against B. subtilis. All three were also reported to possess anti-fungal activity against Candida albicans.

Andrographolide has been reported to significantly reduce the inflammation caused by histamine, dimethyl benzene, and adrenaline. The methanol extract of A. paniculata and andrographolide incubated with macrophages have been reported to inhibit LPS-stimulated NO production in a concentration-dependent manner

The aqueous extract of Andrographis paniculata showed significant reduction in the liver tissue abnormalities and liver enzymes. It used extensively in the Indian traditional system of medicine as a Hepatoprotective and Hepatostimulative agent. The aqueous extract of leaf has been used for treatment of various liver disorders.